After the Washington Nationals took home game seven of the World Series, clinching the onetime Montreal Expos their first-ever championship, the team’s star pitcher Stephen Strasburg was given two incredible gifts: First, he was named Most Valuable Player; second, because he was named MVP, Chevy gave him a free 2020 Corvette C8. One thing: The Corvette you saw Strasburg excitedly accept on TV? It isn’t his.

Say what? Chevrolet is still ramping up C8 Corvette production, meaning there are very few of the hot new mid-engined sports cars in existence. (A wee little General Motors worker strike is partly to blame, although it finally officially ended this week.) We’re told that only two 2020 models are available for use by both the automotive press and GM marketing departments. One is a Sebring Orange example that’s currently located in Southeast Michigan, around GM’s Detroit headquarters, and which we here at Automobile reviewed. The other, a Torch Red Z51 model, is the car you saw on TV standing in for Strasburg’s future ride. You may have also seen it on MotorTrend, being jumped at speed and being tested. It’s the same Vette they thrashed, GM confirms. 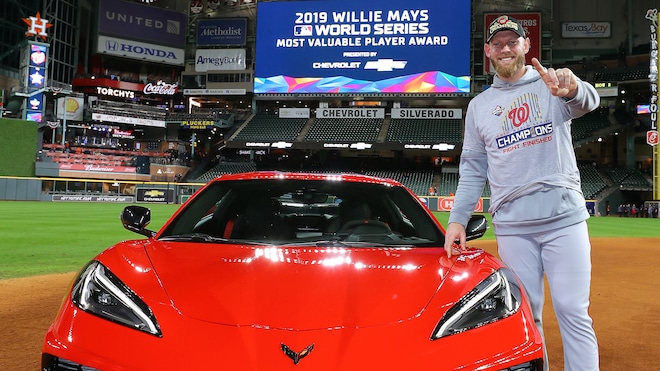 So where’s Strasburg’s Vette? Besides being little more than a twinkle in the eyes of some line workers at GM’s Corvette factory in Bowling Green, Kentucky, it’s awaiting his personal specification. The Nationals pitcher will be allowed to order his 2020 Corvette however he likes it and take delivery likely early next year, along with the rest of those in line for a new C8. But don’t feel too bad for the guy—he may have been given a prop Corvette on TV, but nobody wants that prop Corvette, given what it’s been through. We imagine this Torch Red C8 Corvette will continue to be photographed, hammered on, and the like by other members of the press until it perhaps meets an ignominious end in a crusher, a typical fate for early production GM press vehicles.